Thanks to the generosity of our volunteers, donors and corporate partners, Habitat for Humanity has provided decent and affordable shelter for hundreds of thousands of families in need globally. We are grateful for their kind support. 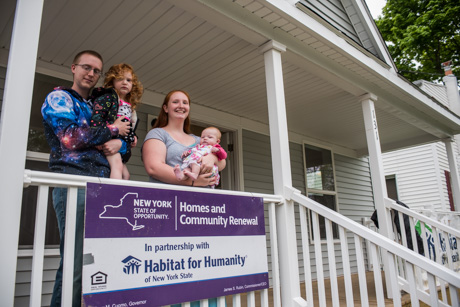 The Dow Chemical Company has been a national partner of Habitat for 35 years. As Habitat’s national insulation partner, $4 million of Dow Building Solutions gift-in-kind product donations will be used on home builds in 2017 throughout the U.S. and Canada to help build strength, stability and self-reliance through shelter. Dow products were provided to 3,179 homes in 2016, offering energy efficiency and comfort to Habitat homeowners.

Since 2003, Lowe’s has committed nearly $40 million and provided countless volunteer hours, touching more than 1,800 Habitat families. As underwriter of the Women Build program, Lowe’s has trained and empowered thousands of volunteers in homebuilding skills. In 2017, Lowe’s donated $2 million among 300 communities nationwide.  Habitat for Humanity of Genesee County was counted among those communities.

Whirlpool has donated more than 184,000 ranges and ENERGY STAR qualified refrigerators to new Habitat homes built in North America, serving nearly 92,000 families. The company has sponsored more than 175 homes around the world and has donated more than 46,000 products to Habitat ReStore retail outlets, helping to raise funds for local Habitat efforts.

Yale Locks & Hardware, an ASSA ABLOY Group brand, has provided more than 700,000 locks, valued at more than 16 million, to Habitat for Humanity homes primarily in the United States, and additionally in Mexico and the Asia Pacific region. Yale became a national partner of Habitat for Humanity in 2001 and supports Habitat house construction through employee volunteerism.

We invite your company to partner with us and support our mission.

You can get involved through: